Roman Reigns is an American professional wrestler. In 2010, he signed a contract with WWE. On 19 August 2010, he made his debut in the 15-man battle royal. 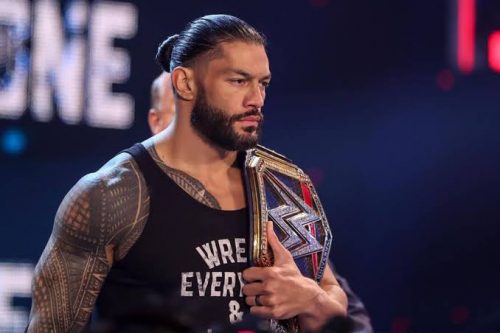 In 2012, he made his appearance at the Survivor Series alongside ‘Dean Ambrose’ and ‘Seth Rollins’. The trio declared themselves as ‘The Shield’. Reigns, Ambrose, and Rollins defeated ‘Team Hell No’ and ‘Ryback’ in their debut match. The Shield then made their WrestleMania debut, where they defeated ‘Sheamus’, ‘Randy Orton’, and ‘Big Show’ at WrestleMania 29.

In 2015, he defeated ‘Alberto Del Rio’, ‘Dolph Ziggler’, and ‘Kevin Owens’ in a fatal four-way to become the number one contender for the WWE World Heavyweight Championship. He is the six-time world champion in WWE, having held the WWE Championship four times and the WWE Universal Championship twice.

He was ranked number one in the list of the top 500 singles wrestlers by ‘Pro Wrestling Illustrated Magazine’. In 2022, he became the longest-reigning Universal Champion for more than 657 days, which is recognized as the sixth-longest world championship reign in the promotion’s history.